The Dutch police and the Netherlands Forensic Institute (NFI) are working together to make grab marks on clothes visible. The better a grab mark of an (unknown or known) perpetrator is visible, the greater the chance of forensic experts being able to secure DNA.

One can conceive of several cases in which the method could play an important role. For example, in the case of a walking woman who is being attacked from out of the blue, or a young girl who is pulled from her bicycle and abused.

“In their attack, the perpetrators grab the clothes of their victims and thus leave DNA behind. Such an event may be so traumatic to the victims, that they cannot recall what exactly happened, so neither can they recall where they were exactly grabbed,” Kim van den Bogaert explains. She is a graduate detective at the Forensic Investigation Department of the Central Netherlands Police Unit and conducted comprehensive research into making grab marks visible.

In those cases, the police may take untargeted sampling. But, wouldn’t the chance of a successful sample be much greater when you can make the perpetrator’s grab marks visible and tae targeted DNA samples? 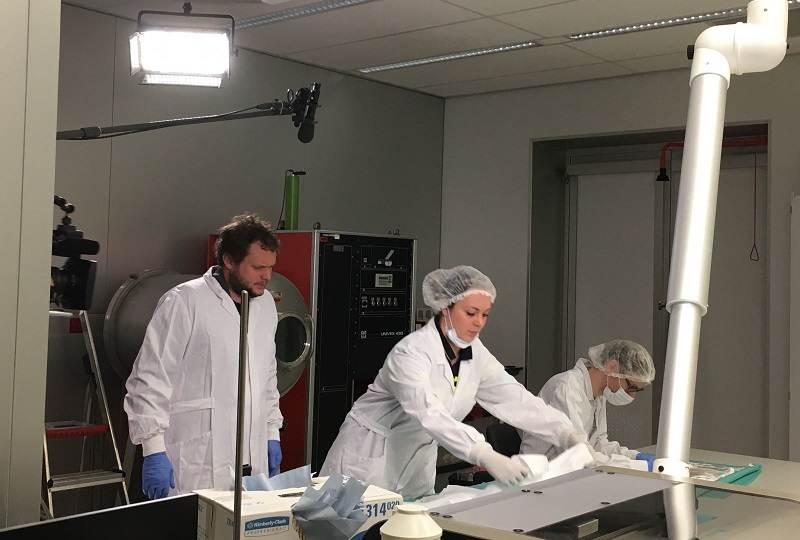 How long does a grab mark remain visible?

Making grab marks visible is not an unknown discipline among forensic researchers, but visualising fingerprints on porous substrates such as cotton and polyester had hardly ever been the subject of research. Previous research showed that so-called ‘metal evaporation’ is the best method to make grab marks visible on fabrics.

But how long after the crime can this method still be used? And, is it possible to develop better DNA profiles by means of this method than when the victim roughly indicates where he or she had been grabbed? Van den Bogaert used these two questions to get to work. She conducted her research at the NFI, in cooperation with the Fingerprints and Biological Traces Departments. Scientific researcher Matthijs Zuidberg coordinated the research.

We asked employees to wear white polyester and cotton shirts. They would walk around in them for a day or two, the researcher explains. We ‘evaporated’ the shirts at several points in time to make the grab marks visible; so, after a day, after a week, a month, and after three months.”

We asked several NFI employees to indicate where they thought the grab marks were. “In respect of each shirt, I put this question to three employees. If two out of the three were able to point out the grab mark, we recorded this as an identification of the grab mark.”

In addition, the graduate detective said, the method of metal evaporation does not damage the DNA. “This way, untargeted on a larger part of the shirt is still possible later on.”